Article Analysis: Earth has lost half of its wildlife in the past 40 years, says WWF

Title: Earth has lost half of its wildlife in the past 40 years, says WWF

This article deals with natural resource scarcity at an alarming speed. The article has provided details about the reasons about why the earth has lost half of its wildlife in the last 40 years which is a negligible time period compared to the world wildlife history. 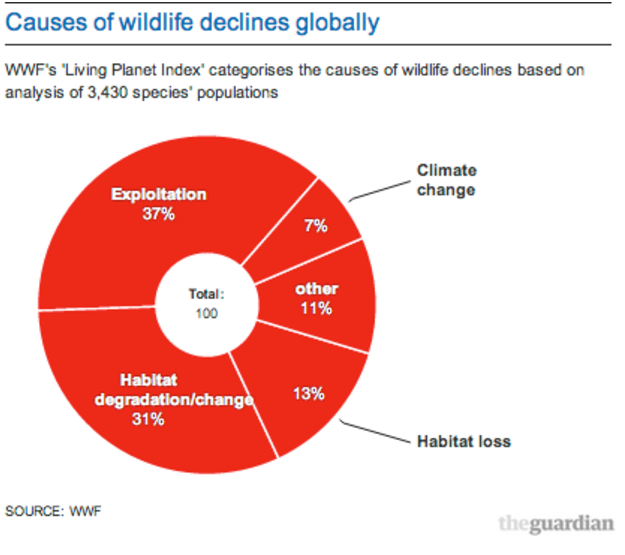 As depicted in the above graph, the biggest reason of wildlife getting extinct is its exploitation. This exploitation is done in many ways according to the article. Many African countries may actually depend on the income that they get from their wildlife exploitations. For example they let hunters to hunt in large numbers against a huge amount of money paid. Many animals are killed for their body parts like their bones and skins. Climate change that is one of the man-made situation is also a cause of wildlife extinct. At the moment it’s just 7% but with time, it would increase as we see the implications of climate change with severity. The habitat degradation or change is also among the major factor behind wildlife extinct.

The situation related to the safety of wildlife is getting worst as we have already lost 50% of the world’s wildlife in just 40 years. The situation is definitely made worst due to human intervention. The situation can be made better if we understand this worsening situation and start thinking about doing a collective effort to save these animals from getting extinct.

Animals body parts and hunting has become an economy for many people in the world. World countries must help African countries save their wildlife by helping their economies. Many of the countries that has the highest wildlife population are poor. If the UN and WWF comes forward and help these countries develop their tourism industry, the sighting of the wildlife can become a source of income while these animals would be save from being killed.