Describe a basic SQL SELECT/FROM/WHERE framework as the basis for database queries.

Describe a basic SQL SELECT/FROM/WHERE framework as the basis for database queries.

Structure Query Language (SQL) is a powerful database related computer language that is used to write new information to the database and retrieve or delete existing information in the database. SQL works at the base of many website that we use online and the data that we put in different forms is stored in tables with columns and rows in an SQL database at the back end.

SELECT/FROM/WHERE is a powerful database query frame work that is used in SQL to identify different locations in an SQL database. This set of framework is what provides a basis to most of the other queries to function in a database. SELECT command is used to identify which column in a database would be used. A database might have multiple tables that may contain identical named columns. Therefore the FROM command is used to specify which table in a database consists of the column that is required. When a table and a column in an SQL database are identified, an operation is going to be performed like printing or an arithmetic operation. For this to happen, a certain condition has to be met. WHERE command is used to identify that condition. I would like to explain the operation of the SELECT/FROM/WHERE with the following example. We have the following Table1 that we want to call with SQL query and want to print the names of items from “Item” table where the “Quantity” is less than or equal to 10. The query would look like: 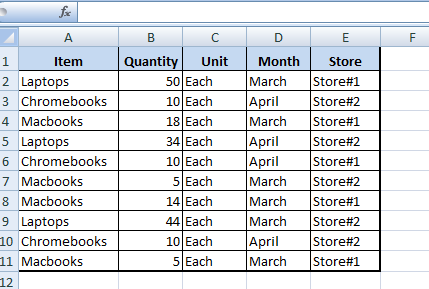 The above query would print Chromebooks and Macbooks.