Your sister is building a new two-story house (which measures 50 feet long by 30 feet wide) and wants to make sure that it is capable of networking her family’s three computers together. She and her husband are both consultants and work out of their home in the evenings and a few days a month (each has a separate office with a computer, plus a laptop from the office that they occasionally use). The kids also have a computer in their playroom. They have several options for networking their home:

What would you recommend? Justify your recommendation.

In the case scenario, the family is building a new house and I believe that the money that has been spent on building the house is much more than what any or both of the networks installation may cast. I would personally want to make sure that there are best data networking facilities available in the house. For this, there is no harm in making one time investment on fixed assets. So, I would go with a combination of both the networks. What I recommend is installing the 100Base-T switch to connect both the offices and the play room. This will make sure that a high speed wired network is available. The fact that it is wired will make it safe against any outside hackers who normally target Wifi networks because Ethernets have a good safety record (Reichenbach, Endresen, Chowdhury, & Rossebø, 2012). The more confidential information can be kept on the office computers instead of the laptops. The kids will also be able to enjoy a faster gamin experience inside their room. The following diagram would better explain the combination of the two networks. 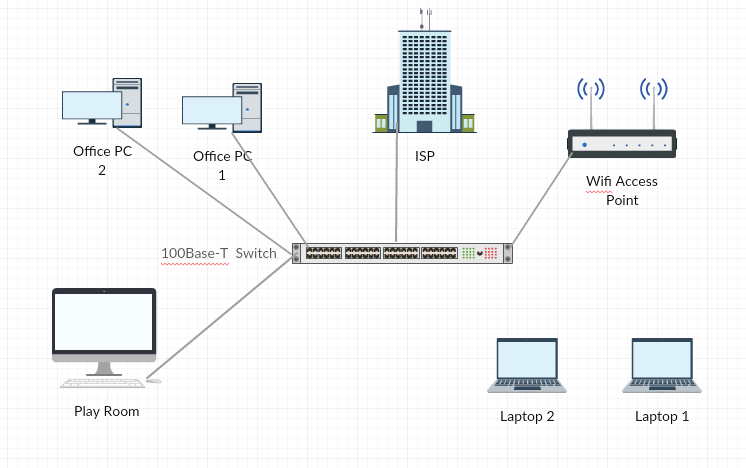