The movie, namely The Matrix, was directed by the Lana and Lilly Wachowski, who are also known as the Wachowski Brothers and was released in 1999. The matrix is a movie that centers on the main protagonist, namely Neo, who is a software hacker, and is chosen to be revealed about the world he lives in and the miniscule roles that he is made to play through the control of machines. The movie then focuses on the character fighting in a world that is controlled by a centralized authority, and through his use of software technology and other abilities, he is able to overcome the control of machines and find a balance for both entities in the same world. The paper uses software engineering as a vital proponent in making the movie more technologically modern with the time period in which it was released.

Firstly, the movie uses graphic and visual images that are relevant to the profession of software engineering. These visual aids bring about a very mutual feeling in every viewer that the movie has a lot to do with hacking, software, and computer language. The image shown below clearly illustrates the use of computer language in the green texture in which it was usually illustrated in actual computers of the time. This goes to show how the movie’s visual aids automatically try to associate the viewer with computer technology of the time and how the movie tries to invoke technological and software prompts in the viewers. 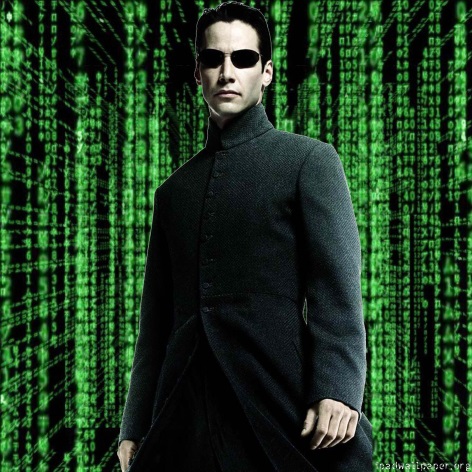 Furthermore, the main character of the movie, whose name is NEO, is shown to be a computer hacker while working his normal day jobs as a software engineer in an unknown organization in the modern world. This goes to show how the movie directly begins as a technology-related piece of art since it focuses on professions such as hacking and software engineering just as it begins to play out its actual story. The character Neo is also more than just a hacker. He is a tool that will be used against the machines in a form that he will have superior powers in the computer world and will have more capabilities and skills to use against other computer programs (Stucky). Basically, this goes to show that Neo himself is a computerized weapon in the computer world scenario of the movie. In the actual world, Neo is simply using computer technologies and software to engineer him as well as other human individuals to become highly upgraded and enhanced in the machines’ produced computerized world. This goes to show how the central theme of the movie seems to revolve around technology and computers, making machines the controllers of computerized technology while showing how humans can only use such technology and engineer it into something better for their own benefit, or in the movie’s case, for their own defense.

The movie also shows how the main phenomenon of its central plot line, is a result of computer and software engineering. In the movie, the main central world, where all humans are kept captive, is known as the matrix. This matrix is a combination of 1s and 0s, which is a binary digit program used to create computerized software in order to process information. This shows how the main world of the movie is computerized, and hence, a subject of computer engineering. In modern times, people do create actual 3d worlds in their computers in order to look over the landscape and spot any problems or errors that may not have been spotted earlier (Blizek, Desmarais and Burke). The computerized world of the movie is similar in this manner. Further, the engineer or architect of the matrix recalls how he had to try over a number of times before he was able to create the perfect matrix program where he could keep the humans captive. The image below shows how the movie’s scene where the architect reveals how there have been more Neos before him and how the matrix was a flawed result of an engineering program, yet it was mastered to perfection over time.

Finally, the movie’s plot line also focuses on computer and software engineering in metaphorical terms. The main antagonist of the movie, namely Agent Smith, is essentially a computer software that has been built to protect the matrix, which is itself a computerized world and hence, another product of computer engineering. Agent Smith is hell bent on killing or neutralizing Neo, who Agent Smith sees as a computer software that is built to be intent on damaging the entire computerized world, which is the matrix itself, and hence allowing the captive humans who are trained to actively work within the matrix to escape the computerized world and begin their lives in the actual world, which is currently dominated and controlled by machines.

While interviewing my friend Ali, who is a computer security professional with a financial transaction company in UAE, I got the following ideas about the job of a Computer Engineer with specific reference to computer and network security. Mr. Ali informed that his job description includes but it is not limited to analyzing transaction security issues on a continuous basis. The firm often detects that hackers attack their transaction networks and try to make illegal transactions, put infinite loops into their transaction processes to get them slower, steal personal accounts information and such like other attacks which make the company’s transaction network as vulnerable and its reputation at stake. Ali takes care of several things like taking complaints data, network transaction speeds, abandoned transactions, lost transactions, failed transactions, reverse transactions and many other such variables like the time of the failure or fault, the location, the type of failure, and the consequent behaviors of the network to reach the root cause and then programs security measures to eliminate that fault from occurring again. Moreover, criticality of financial transactions does not allow him to wait for the failure to occur so that he can respond to it with security measures. Therefore, he must keep himself up to date with all the possible security threats, predict them in advance and try to take precautionary measures.

Comparing Ali’s job to the Matrix movie, I feel that both compare in terms of their activities although the movie goes for more ideal representations. Both in the movie and in the real world there is a hero (ethical hacker/security professional) and a villain (bad hacker). Both use the same knowledge and skills but their perspective of looking at things and the consequences are different from each other. Just as in the movie, both the roles are always busy in defeating each other and for that purpose they have to predict the way the opponent can act, plan or think. Similarly Ali’s job as a security professional always requires him to predict the way bad hackers of the financial network can think plan and act in order to take appropriate measures in time.

The difference in the movie and the real world is only to the extent, that movies normally represent an exaggerated picture of things, while in the real world, they are more practical and not that much ideal as in the movies. However, such technology movies help provoke many creative ideas in the minds of the professionals in their areas of expertise and studies.