SQL or Structured Query Language is a computer language used to manage different databases. SQL can write new information into a database, search and retrieve information from a database and delete selected information form it. There are many sets of statements SQL that perform different operations.  These statements are then combined to form queries and perform specific operations. Some of these queries are Select, From, Where, Delete, Like, Inner Join, Order By and Update (“SQL Quick Reference”).

Though there are many combination of SQL statements, Select, “From” and Where provides a basis to the overall functioning of a SQL database. This statement is the basis of calling a database for specific data in the database tables and the respective rows and columns. Select statement provides the location of a specific column. The “From” statement provides the name of one or multiple tables. And “Where” is a condition operator which tells SQL to implement a certain query if the condition is met.

SELECT/FROM/WHERE framework is the most important because almost all other statements work in combination with this framework to function in the form of queries. For example if we want to print something when the logical quantity of Tibet Clear is less than 34500 you can write the following query:

This will print the message to inform that the stock lower limit is reached.

SQL has the capacity to collect data sent to it from the outside sources and store it in its tables. As can be seen in Figure 1 that SQL can get data from multiple source. To store data from another source, the basic design of the database has to be writable. 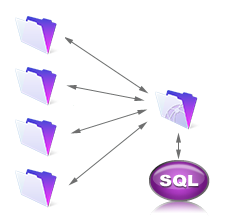 The above query is a general design of importing data into a host database from another database. The destination and source databases and the respective tables have to be identified with the help of the query.

E-R diagrams are used to show relationships between the data in two different tables. The relationship is established with the help of foreign-key. The foreign key is the name of a certain table column that is used to relate its table to another table. Following is an E-R for two tables in a non-profit organization that collects donations from different people. These tables are from my Access database for another assignment. 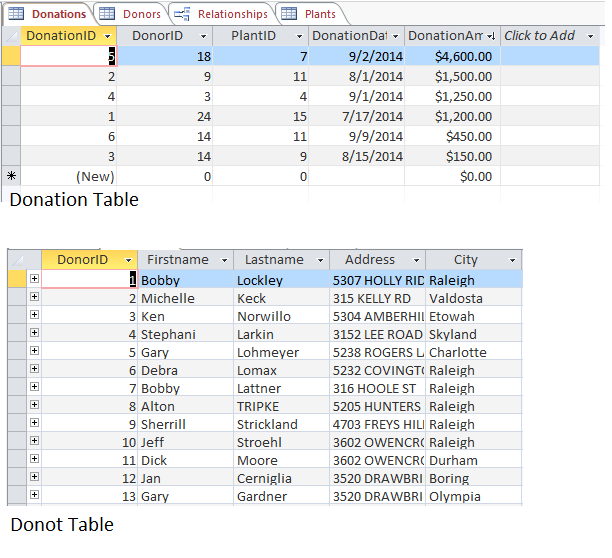 In the Figure 2, we can see the relationship diagram between the two tables. The DonorID is acting as a foreign key.

There are functional dependencies where not one but two attributes make another attribute dependent e.g. (X, Y) -> Z. In such cases we cannot say that either one of Y and X can determine Z.